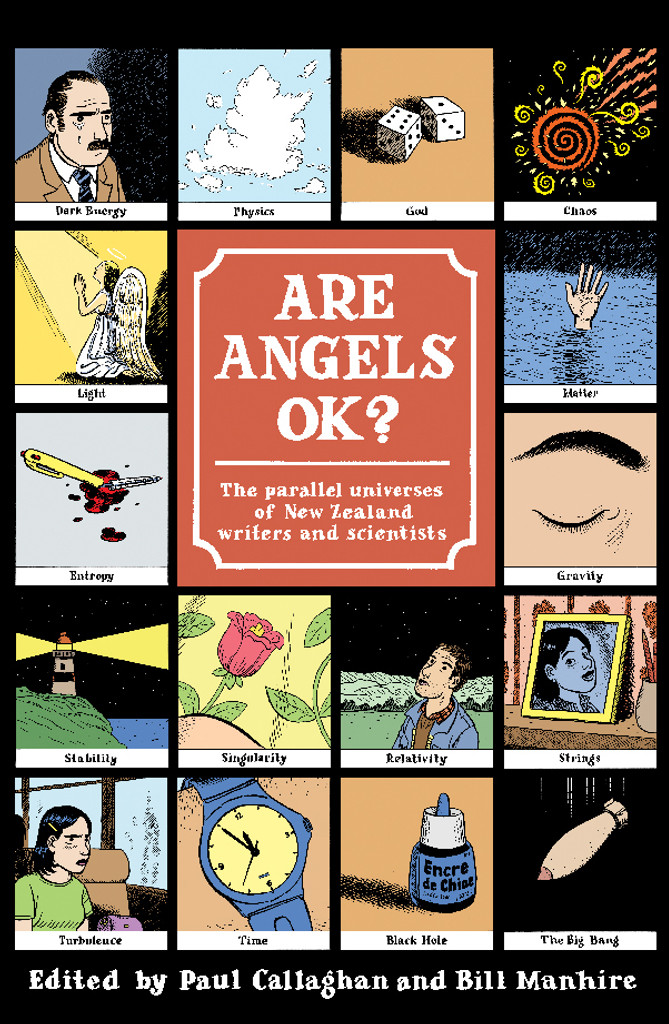 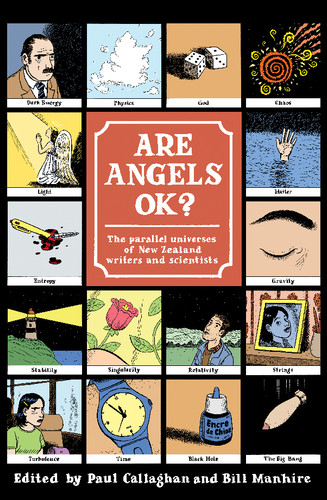 And thus began an extraordinary blind date between New Zealand writers and physicists.

the sandpile phenomenon . the curvature of space time . wave particle duality . the untimely death of Schrodingers cat . Elsewhen . Heisenbergs Uncertainty Principle . dark energy . entropy . the arrow of time . quarks . anti-matter . The Death of the Sun and The End of the Universe . . .

and the subject of a series of National Radio programmes, this is a provocative and fascinating reader for science and non-science buffs alike. Since Einsteins time the world of physics has become a strange, fantastic and sometimes disturbing place  potentially a rich domain for philosophers and artists - the results of these science/literary and artistic collaboration prove this point.

Praise for Are Angels OK?
There are some real gems in this beautifully constructed book
Kate Orgias LUMIERE READER

an entertaining collaboration between NZ writers and physicists. Margaret Mahy, Glenn Colquhoun, Elizabeth Knox and others weave stories around the world of quarks, anti-matter, wave particle duality and such like. It sounds complex, and occasionally it is, though it succeeds in making science interesting, intelligible and even whimsical. A fine collection of creative writing that delves into the mysteries of the universe through very human avenues.
Mary de Ruyter CITYMIX

Manhire has done an outstanding job of bringing in a range of first-rate writers, from Catherine Chidgey and Margaret Mahy to Lloyd Jones and Witi Ihimaera. There's really nothing here I'm not extremely glad to have read, and Callaghan's closing essay on science, scientific thinking and the experience of working with Vincent O'Sullivan and Jo Randerson rounds the book out perfectly.
David Larsen THE LISTENER

Science and fiction have flirted before, to spawn science fiction. But this baby, despite its inevitable teething-pains, is at times even better. First, just as a game is more interesting to watch when it has rules, the stories are more interesting because the artistic imagination has been asked to work within the rules of some angelic New Zealand scientists. Second, the stories have more culture than sci-fi. Theyre entertaining and exciting proof that New Zealand art and science can go together like a pukeko in a ponga tree.
Daniel Batten IDEALOG

Scientists and musicians, and scientists and artists have worked well together in the past. Thus a successful alliance between scientists and fiction writers is not perhaps as strange as it might first appear. Both science and writing are creative endeavours. Both require considerable imagination, and the courage to "think the unthinkable" (although scientists are denied the luxury afforded writers of fiction of "thinking the impossible"). After this successful experiment, perhaps we will see more examples of the coming together of creative individuals from different fields of human endeavour.
David Clark NEW ZEALAND BOOKS

Are Angels OK? was launched at a special one-off performance on Wednesday 31 May at the Paramount Theatre in Wellington.

Subjects under discussion ranged from Janet Frame's shipboard-meeting with a physicist she called 'Albert', to physicist and poet frogs, to a view of God spending time tinkering with the universe in a garden shed, to 'real' or 'unreal' clouds.

"There's a poet in this town who will not learn to dance. He says with a sly grin that if you could film inside his shoes, you'd see his toes enjoying small, astonishing movements there. Like the life-or-death riddle of Schrodinger's cat in a box, we'll never know if this is true, but in the paradox is a lightness of being that stacks up - for now - to something more - or less - than words."

A crack troop from the "Are Angels OK?" project headed next to the Cheltenham Science Festival and to two other public events in the UK.