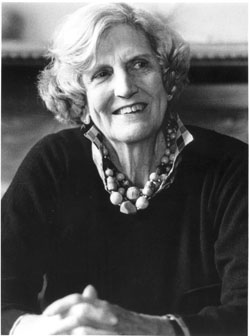 Barbara Anderson (1926–2013) is among New Zealand’s most respected and best-selling authors. She was born in Hastings, New Zealand and graduated B.Sc. Otago University (1947) and BA Victoria University of Wellington (1984).

In August 2009 she was awarded the honorary degree of Doctor of Literature from the University of Otago in recognition of her outstanding contribution to New Zealand literature. Vice-Chancellor Professor David Skegg says the honorary doctorate recognises Barbara Anderson’s intellectual and artistic achievements, and the high regard in which she is held nationally and internationally. ‘Barbara Anderson joins the company of other distinguished writers to whom this University has awarded honorary degrees in the past – people such as Janet Frame, Ruth Dallas and Cilla McQueen, he says. She has had a remarkable second career as a writer, and is renowned for her mastery of both the novel and the short story, showing great understanding of human nature and critical clarity.’

She worked as a medical technologist and teacher in Hawke’s Bay and Wellington. In 1983 she attended Bill Manhire’s creative writing course at Victoria University of Wellington. Her autobiography Getting There was published in 2008 and Kate de Goldi called it ‘the best New Zealand autobiography since Janet Frame's’.

She was, however, best known as a novelist and short story writer. Her last novel was Change of Heart (2003). The Swing Around was published in November 2001 and was nominated for the 2003 International IMPAC Dublin Literary Award. Her short stories have been published in many magazines including Metro, Landfall, London Magazine, Sport and the Listener. Barbara has also written for the stage. One of her unpublished plays won the J. C. Reid award in 1985 and several have been broadcast. In 1991 Barbara was Writing Fellow at Victoria University of Wellington.

Her first collection of short stories, I think we should go into the jungle,was shortlisted for the Wattie Award in 1989 and the 1990 New Zealand Book Award for Fiction. Portrait of the Artist’s Wife won the Wattie Award in 1992 and has been reprinted 6 times, most recently in October 2002 with a beautiful new cover by award-winning designer Sarah Maxey.

In November 2005 Barbara's Collected Stories were published. This collects work previously published in I think we should go into the jungle and The Peacocks and also some unpublished stories. All of Anderson's books have been published and well-received in the UK.

‘A quite irresistible writer with a microscopic eye for telltale detail – and a dazzlingly accurate ear for dialogue as it is really spoken.’ —Dirk Bogarde

Getting There: An Autobiography

Portrait of the Artist's Wife - op