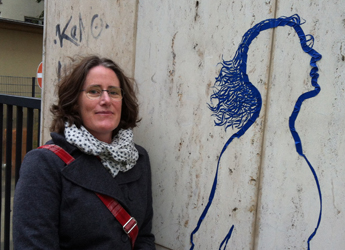 Kate Camp was born in 1972 and lives in Wellington. She is a poet, prose writer and reviewer. Her first collection of poetry, Unfamiliar Legends of the Stars, won the NZSA Jessie Mackay Award for Best First Book of Poetry at the 1999 Montana NZ Book Awards, and was highly praised by reviewers. The Mirror of Simple Annihilated Souls (2010) won the 2011 NZ Post Book Awards Best Book of Poetry category.

She was the voice of Kate's Klassics, monthly conversations on classic literature with National Radio's Kim Hill.

Kate's poetry has featured many times in the annual publication Best NZ Poems, and in the anthology The Best of Best New Zealand Poems. She was twice shortlisted for the International Prize in Modern Letters (2003, 2006), and was appointed Writer in Residence at Waikato University in 2002. In 2011 Kate was the recipient of the Creative New Zealand Berlin Writers' Residency.

Her latest collection is The Internet of Things (2017).

‘Kate Camp is literate yet hip, culturally attuned and funky … This poet skips easily through various fields of reference, medical, economic, anthropological, literary, pop-culture, collecting and bringing home specimens as good poets do … If her first collection is this good, what will the second be like?’
—Cath Kenneally, Landfall

The Mirror of Simple Annihilated Souls