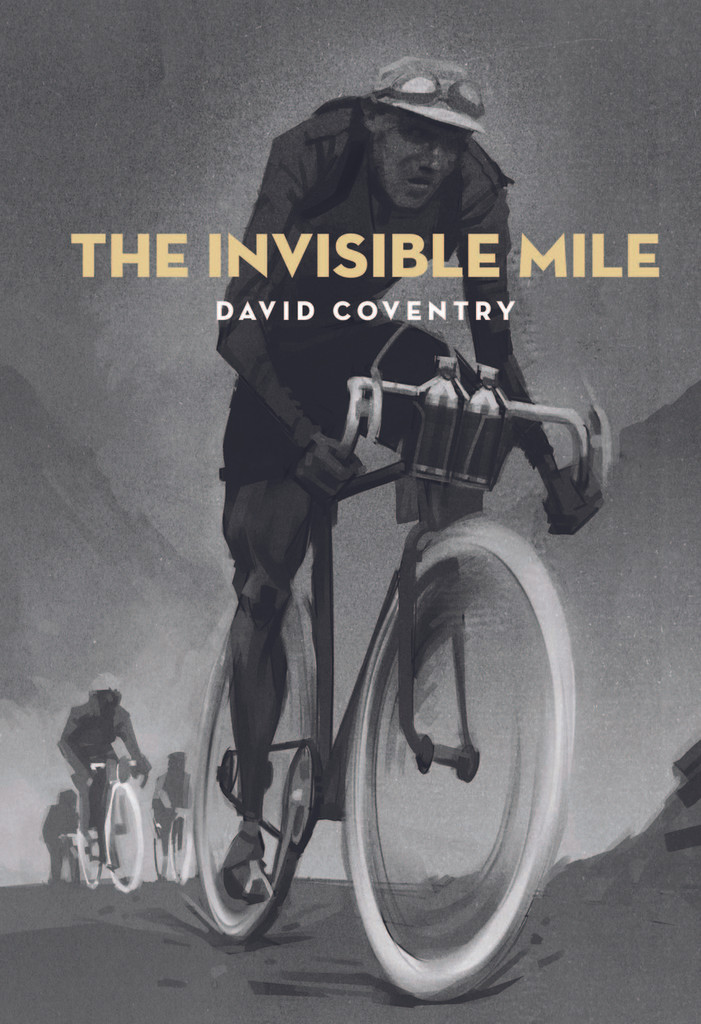 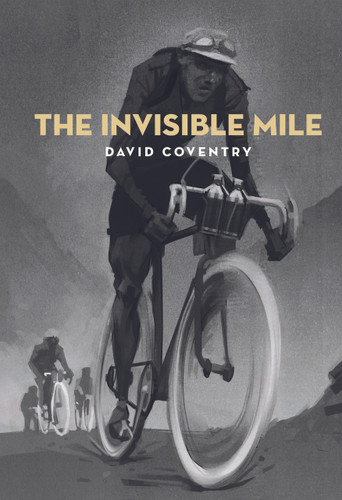 The 1928 Ravat-Wonder team from New Zealand and Australia were the first English-speaking team to ride the Tour de France. From June through July they faced one of toughest in the race’s history: 5,476 kilometres of unsealed roads on heavy, fixed-wheel bikes. They rode in darkness through mountains with no light and brakes like glass. They weren’t expected to finish, but stadiums filled with Frenchmen eager to call their names.

The Invisible Mile is a powerful re-imagining of the tour from inside the peloton, where the test of endurance, for one young New Zealander, becomes a psychological journey into the chaos of the War a decade earlier. Riding on the alternating highs of cocaine and opium, victory and defeat, the rider’s mind is increasingly fixed on his encounter with his family’s past. As he nears the battlefields of the north and his last, invisible mile, the trauma of exertion and disputed guilt cast strange shadows on his story, and onlookers congregate about him waiting for revelation.

Praise for The Invisible Mile

‘If David Coventry’s vivid début were only about the sport of cycling, it would be one of the most gruelling novels about sport ever written in New Zealand. But it’s quite a bit more than this . . . A truly extraordinary first novel.’
—Nicholas Reid, NZ Listener

‘...absorbing, and on many levels. It’s a book about violence, youth, mythology, history, guilt and love – all set to the agonising rhythm of an inhuman bike race. Some achievement! Fictionalised accounts of sporting events don’t always work, but this has the same feeling of total immersion as I remember feeling when I read David Peace’s The Damned United.’
—Ned Boulting, ITV Journalist and author of How I Won the Yellow Jumper

‘The Invisible Mile is a dream to read, in all senses of the word. It’s a trance-like account of the 1928 Tour de France . . . The writing is fierce, a bravura mix of narcissism, masochism and lyricism grounded in the honesty of the unnamed rider’s journey into his self and the dawning realisation that the race has become a grand metaphor for the trauma of World War I.’
—John Sinclair, Metro

‘I think everyone should read this book; it’s a really important book by a New Zealand writer. I’m just overwhelmed by it.’
—Ruth Todd

‘In The Invisible Mile, Coventry succeeds in creating a complex, nuanced novel which fundamentally questions our relationship with the histories which shape us, and the ways in which we tell the stories of who we are. At the same time, it is in many ways a classic sporting yarn about grit and determination in the face of a physical and mental test of endurance. A writer in his mid-forties, Coventry seems to have arrived fully-formed in our literary landscape with this fascinating debut.’
—Olivia Macassey, Takahē

‘Coventry invites you back to the 1928 Tour de France, to the horror of the First World War, to the hallucinogen mind of a rider. And you go with him, whether you like it or not, because he forces you. Sport and literature are not natural allies, but are here loved ones in the hands of David Coventry.’
—Bert Wagendorp, bestselling author of Ventoux

‘The stream of consciousness style of writing is almost hypnotic as it compels you to share in the narrator’s ongoing struggle and to witness the slow unveiling of his past life. I’m not bold enough to describe it as unique, lest some more widely read critic names some obscure forerunner. I will instead recommend it as a brilliant tour de force of writing talent and style that richly rewards the reader. I leave it to you to decide whether or not this debut effort immediately places David Coventry among the elite of New Zealand authors.’
—Brian Clearkin, Landfall

David Coventry was born in Wellington, where he resides with his wife and cat. A former sound engineer and film archivist, Coventry has a Masters with Distinction in Creative Writing from Victoria University's International Institute of Modern Letters (2010). In 2001 he completed an Honours degree in English Literature (VUW).The Invisible Mile is his first book.

To drop out is to die

&quot;Everyday I crash and I hope its the end&quot;. This sentence probably sums up the action of this book better than any other. But this is much more than a book about the 1928 Tour de France. This is epic literature with all the usual themes present; suffering, redemption, the horrors of war, the camaraderie of men, love and loss. There are also descriptions of the torments of stage racing of such hallucinatory intensity you&#039;ll never question why cyclists dope again. Rather you&#039;ll question what kind of masochist would choose not to dope. David Coventry has written not just the great Kiwi sporting novel but quite possibly the best novel about cycling ever. To him I can only say &quot;Chapeau!&quot;

Certainty of Doubt, The: Tributes to Peter Munz