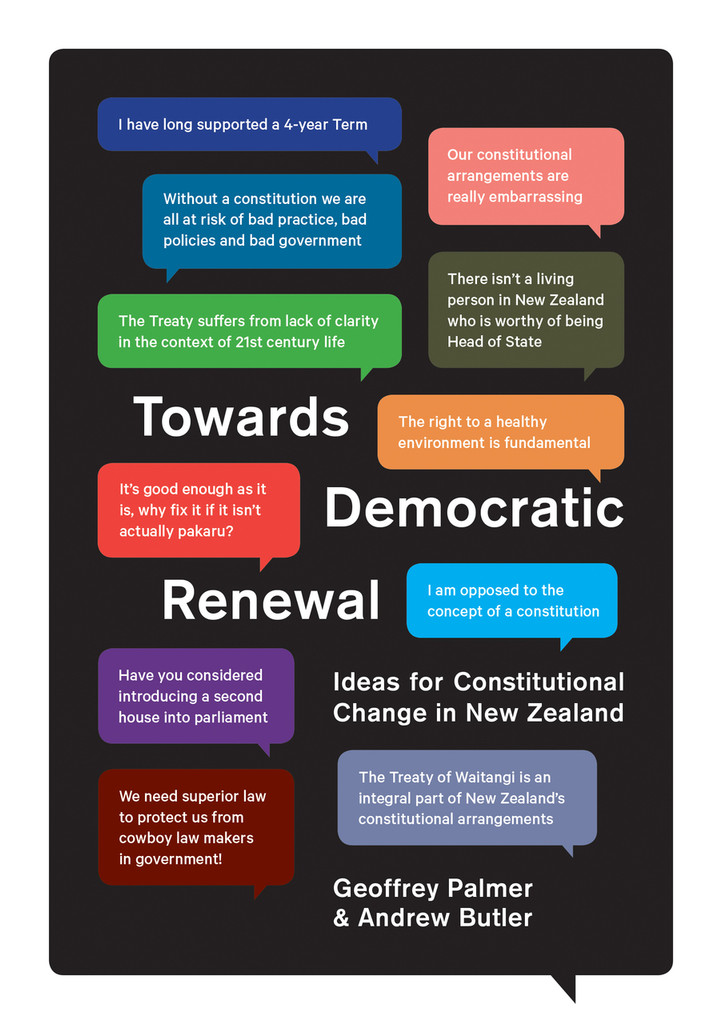 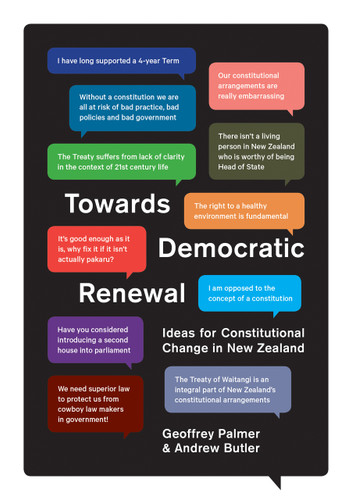 Towards Democratic Renewal: Ideas for constitutional change in New Zealand

In 2016, Sir Geoffrey Palmer and Andrew Butler proposed and published a written, codified constitution for Aotearoa New Zealand. Since then the authors have travelled the country, discussing with the public the nature of New Zealand's identity and where the country is headed. After considering their conversations and formal submissions, this second book – with its revised proposal for a codified constitution – is the product of a year in development.

Towards Democratic Renewal reinforces Palmer and Butler’s argument for a robust and democratic framework that will safeguard our political system against future challenges, from climate change to earthquakes, ‘post-truth’ politics and surveillance. This clear, revised constitution defines and entrenches government accountability and transparency, protects the rights of our peoples and tangata whenua, and offers transformative steps to uphold the sovereignty and integrity of Aotearoa New Zealand.

Rt Hon Sir Geoffrey Palmer QC was a law professor before entering New Zealand politics as the MP for Christchurch Central in 1979. In Parliament he held the offices of Attorney-General, Minister of Justice, Leader of the House, Minister for the Environment, Deputy Prime Minister and Prime Minister. Since leaving politics in 1990 he has been a law professor, a foundation partner of a law firm, President of the Law Commission, chair of the Legislation Advisory Committee, New Zealand’s Commissioner to the International Whaling Commission, and chair of the Panel of Inquiry on the 31 May 2010 Flotilla Incident for the United Nations in New York. He is a Distinguished Fellow at the Faculty of Law Victoria University of Wellington and a Global Affiliated Professor of Law at the University of Iowa.

Dr Andrew Butler is a litigator for Russell McVeagh in Wellington. He has extensive experience at trial and appellate level, in both public and commercial law, much of it high profile. He has been an academic lawyer at the Victoria University of Wellington and a member of the Crown Law Office. He has appeared frequently in the High Court, Court of Appeal and the Supreme Court and is a leading authority in public law, human rights protection, judicial review and trusts and equity. He has also published on a range of commercial and public law issues.

CONTENTS
1   Why a constitution is important
2   Our constitutional vision
3   What the public told us
4   A Constitution based on principle
5   The State and a New Zealand republic
6   The Government
7   Local government
8   The Parliament
9   Why New Zealand does not need an upper house
10  The Judiciary
11  Integrity and transparency
12  Bill of Rights
13  The Treaty of Waitangi and the constitution
14  More people need to know how government works
15  Elections are not enough
16  Deepening citizen engagement
17  The media, information and communication
18  How to build a new constitution
19  Constitution Aotearoa in English and te reo Māori

Village Transformed, The: Aspects of Change in New Zealand 1900-1990